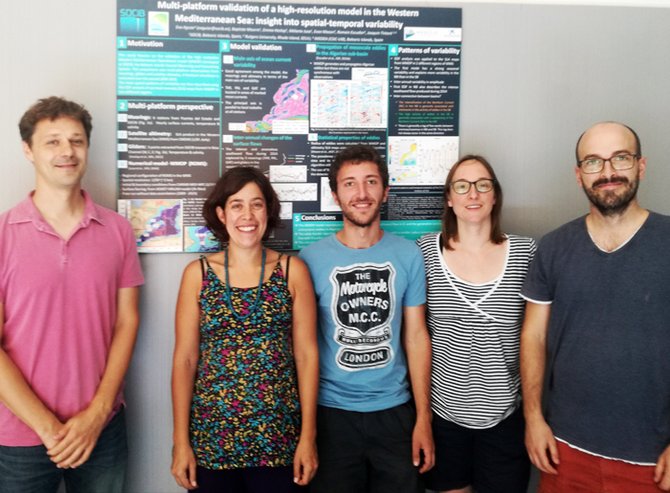 Within the framework of the MEDCLIC, the Mediterranean just a click away programme, in conjunction with the "la Caixa" Foundation, SOCIB's modelling group has developed and implemented a high resolution numeric simulation of the western Mediterranean's ocean circulation from 2009 to 2015. This regional simulation has been assessed using observations from various instruments and platforms, using what is known as a "multi-platform perspective". The results were presented last April at the 5th GODAE Ocean View Coastal Ocean and Shelf Seas Task Team Meeting and EGU General Assembly (European Geophysical Union 2017) international conferences.

One of the scientific community's goals is to develop, validate and integrate high spatial resolution regional ocean models. These models help us to understand the behaviour of our oceans and, based on this scientific knowledge, provide objective, reliable tools. These give local support to the tasks of sustainable management, set up contingency plans for sea rescues or accidental spillages or, in the long term, be able to anticipate the consequences of the various climate change scenarios.

To learn about the current status of these oceanographic models in the western Mediterranean, we talked to Eva Aguiar, who is a physical oceanographer working in the ocean modelling and forecasting group at ICTS SOCIB, within the MEDCLIC programme.

“A numerical ocean forecasting model is a simulation tool based on mathematical equations and numerical calculations to assess and understand the dynamics of physical processes in the marine environment. The model enables us to predict the evolution of variables such as temperature, salinity, currents or sea level". 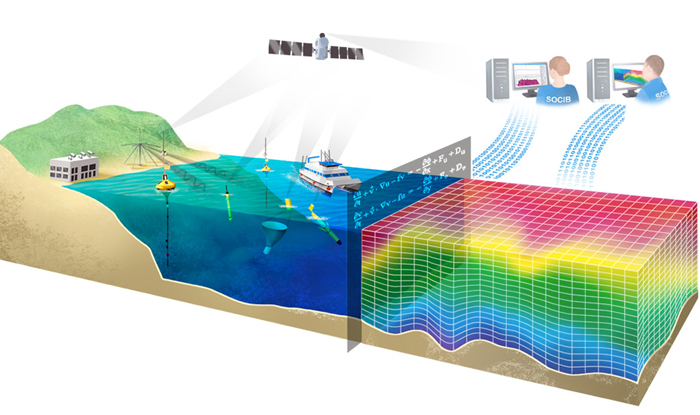 “We are currently working on developing the WMOP (Western Mediterranean Operational model) which profiles the circulation of marine currents in the western part of the Mediterranean with a resolution of up to 2Km. Part of my work consists of validating the high resolution model with real-time data and checking the improvements achieved with the increase in spatial resolution".

The regional simulation has been assessed using observations from various instruments and platforms, known as a multi-platform perspective, such as the one developed by ICTS SOCIB over the last few years.

“Multi-platform assessment has been carried out by comparing the WMOP data with real-time observations measured via satellite, high frequency radar, underwater gliders and oceanographic buoys. These data have also been compared with those obtained by the 'mother' model (CMEMS Med-MFC: a model with lower spatial resolution which covers the entire Mediterranean). The comparison with observational data helps us to assess the reliability of our model, while comparison with the large-scale, lower resolution model illustrates the improvements achieved and demonstrates the importance of small-scale processes in the Mediterranean".

Eva went on to say that, “Quantitative assessment of the model using the multi-platform perspective gives robustness and precision to the results and positions our ocean model as a source of reliable, useful data for society in general. This improvement means we can fine tune tools which are currently in development, such as the detection of plastics convergence areas and/or monitoring jellyfish, which are matters which have specific impact at the moment and which affect the health of our oceans. The model is also useful for addressing long-term goals for understanding the relationship between the ecosystem and the physical environment, and the ability to adapt in the face of climate change and human pressures. We can only help the ocean by knowing how it behaves". 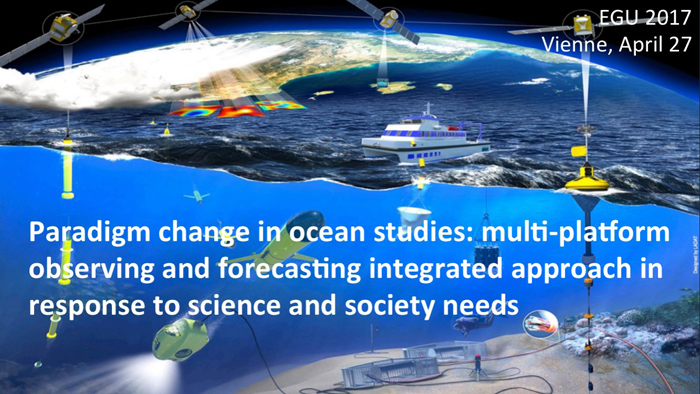 The methodology followed by the group when validating its ocean model provides new techniques which have recently been presented at conferences (GODAE and EGU, as previously mentioned) which back communication and exchange of knowledge and experiences to find synergies, prevent errors and be as rigorous as possible when setting up ocean models. "Our validation tools have received recognition at these two events and several modellers have already contacted us to validate other models in a similar way in other parts of the world".

"Various methodologies were used to validate the model. In the first place we calculated the prevailing directions of the currents based on six fixed oceanographic buoys and using all the available data. The results show that the surface current is parallel to the bathymetry and a proven parallelism between the four data sources used was also found, which means that our model's data is highly reliable." (Figure 1). 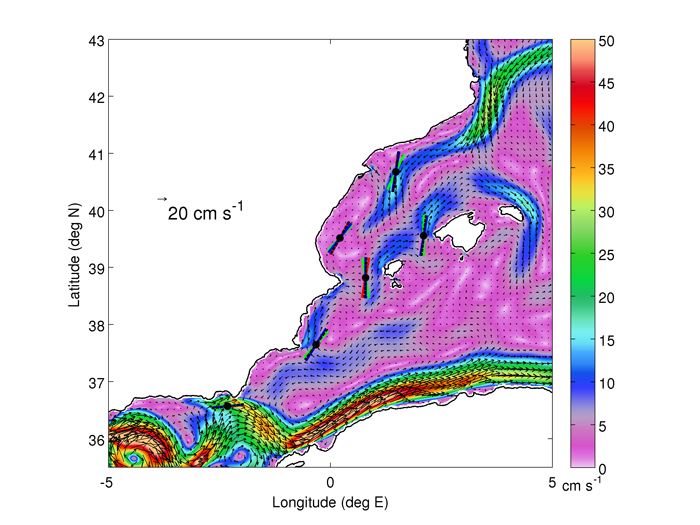 Figure 1 - Prevailing direction of the surface currents in six places along the western Mediterranean coast, calculated using observations from oceanographic buoys (blue), satellites (green) and the results from the high resolution models (red) and low resolution models (black). The average currents between 2009 and 2015 from WMOP are shown in the background.

“Using a different technique, we have profiled the changes which have occurred to surface movement over the years using all available databases. The results show how, in the northern part of the Western Mediterranean, on a level with Tarragona, our WMOP model is closer to real-time observations than the previous model, MED-MFC, which is evidence of the improvements achieved by increasing spatial resolution." (Figure 2).

Figure 2 - Year-on-Year changes to surface movement around Tarragona according to observations from the oceanographic buoys (blue), satellites (green), the WMOP results (red) and CMEMS-MED-MFC (black).

“Finally, we assessed the spatial pattern of the surface current in the Ibiza Channel. This area is highly complex and is marked by having high spatial and temporal ocean volatility. Observations from underwater gliders, satellites and radar were used and also compared to the large-scale model (Med-MFC). The new model's high spatial resolution was crucial in this area when it came to defining at what point in the channel discontinuity of the north-south flow occurs. This discontinuous flow is profiled by our WMOP model, underwater gliders, satellites and radar.  The low spatial resolution of the previous MED-MFC model prevented it being detected". (Figure 3). 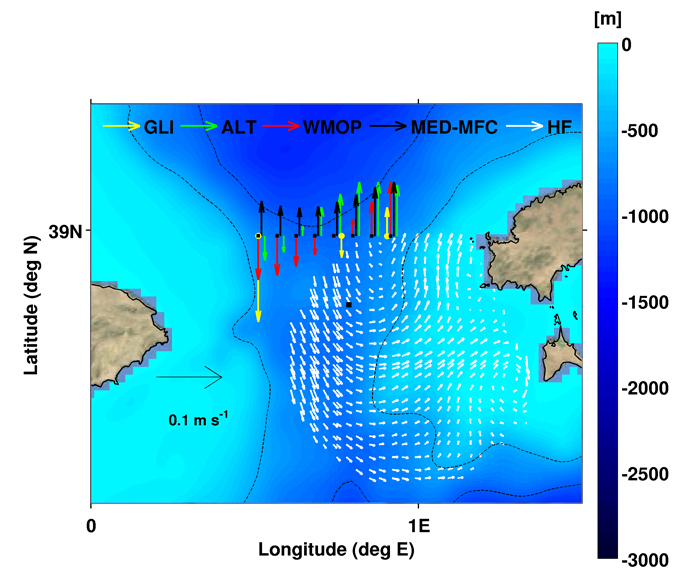 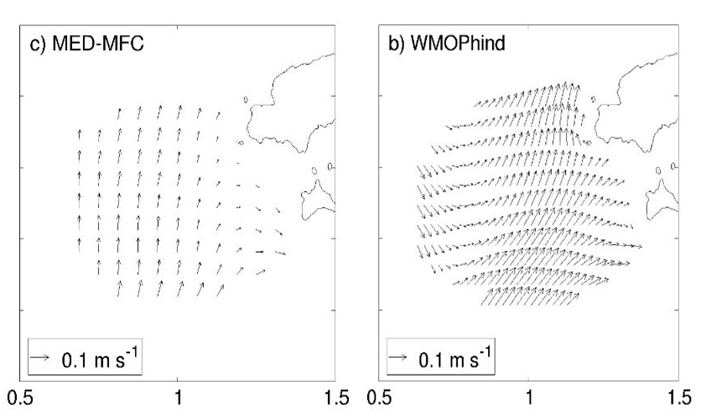 Eva shared these validation techniques with other modellers at the EGU con-ference, pooling her own impressions with others in order to find synergies and future uses.

"Quantitative assessment of the model using this multi-platform perspective gives robustness and precision to the results and positions our ocean model as a source of reliable, useful data for society in general. This improvement means we can fine tune tools which are currently in development, such as the detection of plastics convergence areas and/or monitoring jellyfish, which are matters which have specific impact at the moment".