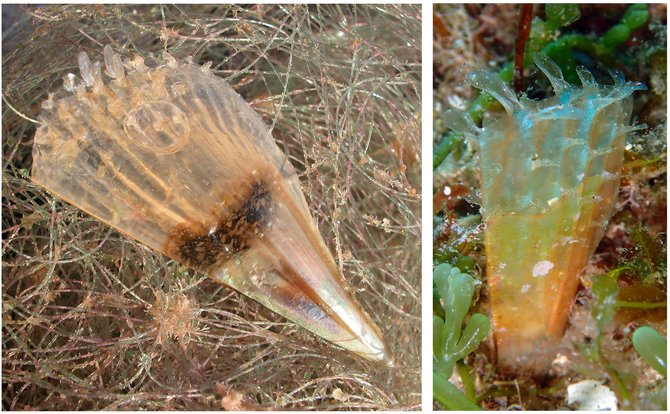 The endemic Mediterranean Fan Mussel (Pinna nobilis) has been pushed to near extinction due to a still ongoing mass mortality event first detected in 2016 and the fact that the causing parasite–the protozoan Haplosporidium pinnae, which is found in the digestive glands of infected individuals– is still present in the environment. To address this problem, researchers at the Balearic Islands Coastal Observing and Forecasting System (SOCIB)’s MEDCLIC Project have participated in a collaborative study on its potential recovery showing the importance of unaffected populations as larval exporting sources and the role of oceanographic currents in larval transport in the area.

In early autumn 2016, researchers first detected a devastating mass mortality event caused by a parasite impacting the Fan Mussel (Pinna nobilis) across the Western Mediterranean Sea, including the Balearic Islands coasts. The disease has been rapidly spreading ever since, threatening the survival of the Mediterranean’s largest bivalve (two shells or valves) mollusc. In this scenario, “potential natural recovery from this dramatic situation relies on recruitment—the process by which young individuals undergo larval settlement and become part of the adult population—, which will depend mainly on larval supply and transport from unaffected sites, and the existence and potential reproduction of resistant juveniles in the affected sites,” according to researchers.

In order to assess the impact of the mass mortality event on the species’ larval recruitment, scientists implemented an unprecedented network of larval collector stations in 37 sites distributed along the coast of the Western Mediterranean Sea including north Africa, and the northern Adriatic Sea during the reproductive seasons of 2017–2019. These sites were selected according to the occurrence of the fan mussel populations previous to the mortality outbreak, with many of them subjected to periodical monitoring. However, most of the populations were affected by the time the first collectors were installed at the beginning of the summer of 2017, as reported by the study.

Furthermore, with the objective to identify the potential origin of larvae transported by ocean currents over the basin during the recruitment period, researchers used the oceanographic forecasting numerical WMOP model developed in SOCIB’s MEDCLIC Project, that provides daily predictions of the Western Mediterranean circulation from the Strait of Gibraltar to Corsica and Sardinia with a 2 km spatial resolution. This simulation tool, which is based on mathematical equations and numerical calculations to forecast, assess, and understand ocean dynamics, was used to simulate backward trajectories from the observation sites where recruitment was recorded. Results of the trajectory model based on WMOP showing the potential origin of fan mussel larvae identified in 2017, 2018, and 2019 in Son Saura (Menorca). Author: Baptiste Mourre, researcher at SOCIB-MEDCLIC. Image published in Kersting et al. 2020.

Overall, “the findings of this network showed a generalized disruption in recruitment with dramatic consequences for the recovery of the species. However, there were exceptions to this pattern, and recruits were recorded in a few sites, such as Son Saura (Menorca), Calpe (Alicante), Mar Menor (Región de Murcia) and Cabo de Gata (Almeria) in Spain, where the resident population had been decimated while opening a little window of hope”, as stated by the researchers. Not only that, “the WMOP model showed the potential geographical origin of larvae during the main reproduction and recruitment period of the species. After disregarding the sites where these fan mussels had disappeared, including most of the Spanish mainland coast and the Balearic Islands coasts, three main regions harboring unaffected populations remain as potential larval sources in the Western Mediterranean: French Mediterranean coast, Delta del Ebro region, and the north African coasts (mainly Algeria),” the researchers added.

As concluded by researchers, this has hinted at the importance of unaffected populations as larval exporting sources and the role of oceanographic currents in larval transport in the area, representing a beacon of hope in the current extremely worrying scenario for this emblematic species.

This study is the outcome of collaborative research between multiple institutions involving leading researchers from the University of Barcelona (UB), the Balearic Oceanographic Centre (COB-IEO), the Mediterranean Institute for Advanced Studies - IMEDEA (CSIC-UIB) and SOCIB, among others.